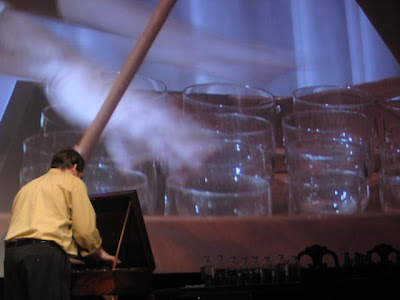 Hooray for lifelong, spellbinding hobbies! Hooray for that tiny world of passionate colleagues who eventually meet to share stories, their instruments and playing. All who pretty much start off alone, on whatever continent (at the time, a negligible matter -- we must explore, so be it!) I hope everyone enjoys these pictures and some short sound samples I have made of terrific musicians and instruments. GMI (Glass Music International) organizes a festival every few years. This one was in Colonial Williamsburg, VA, hosted by Dean Shostak. Actually, Dean -- while you are totally deserving of credit for inspired musicianship, hard work and vision, you're mainly out of business without the woman pictured next to you. Cheers, Valerie! (meet our hosts:) 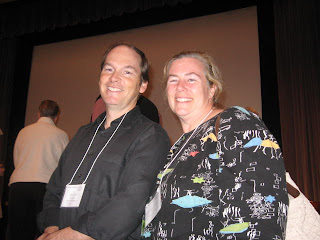 Let's start with some Armonica pics and sounds. Below is a beautiful Finkenbeiner Armonica set in a case built by Steven Lash to exacting historical specifications, and featuring incredible woodworking. The drawers hold water to dip one's hands: 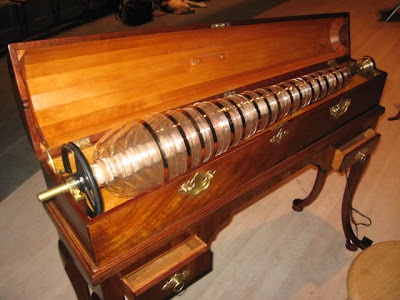 Below, Vera Meyer demonstrates, and here's a short sound sample of Vera playing. Beautiful. Must learn this passage, although it seems so suited to the 'liquid' nature of armonica, I wonder if it would translate. 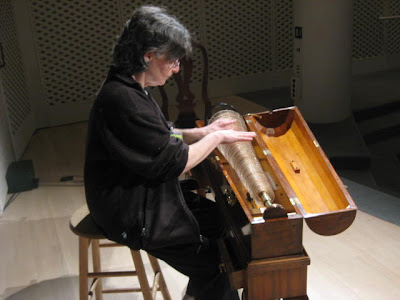 Another of our friends, Lynn Drye of Arizona plays Armonica. Here's a bit of Lynn's Armonica performance. Gorgeous!
More from Lynn: here she plays a glass xylophone (pictured below) 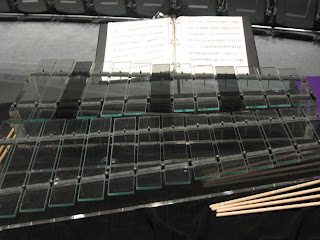 Talking about the different types of mallets... 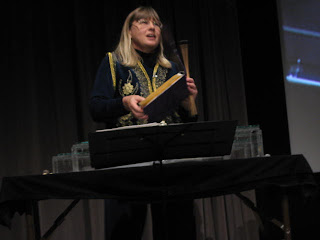 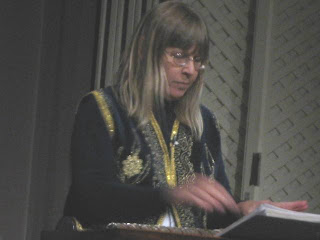 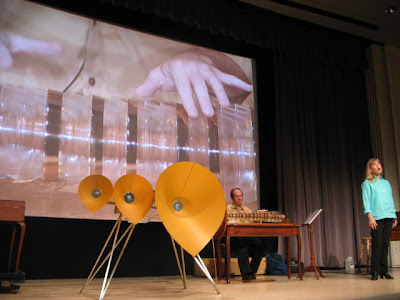 And now you wonder what's with the yellow Elizabethan Collars onstage. It's a Cristal Baschet. This instrument was invented by the Baschet Brothers, two French sound sculpture artists. It's certainly a glass instrument, but it also involves vibrating metal. There are quite a lot of possibilities with the Cristal Baschet, a lot of refinement... but to begin, imagine dragging a refrigerator across concrete in a large empty warehouse, and in a sense you have the raw sound. But then try to twist this into something melodious and haunting, full of range. Here's how it works: glass rods are vibrated by wet fingers in a similar way to armonica or glass harp, but then the vibrations from the glass rods excite different lengths of metal rods which in turn transfer the vibration out through plastic and fiberglass cones. More info here. 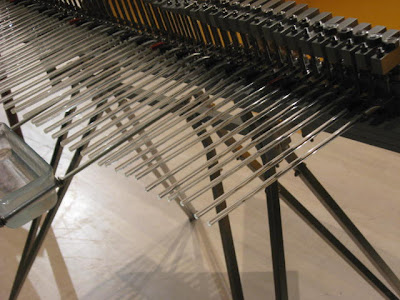 I haven't checked, but I believe the rods are laid out in chromatic order similar to a keyboard. 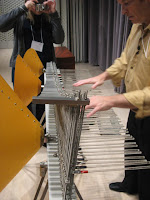 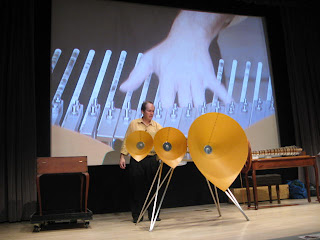 Ready to hear???? Dean plays a bit of Bach.
The price has come down too! Only 20k!!
C'est moi, getting ready to play Friday morning at the W'burg visitor center: 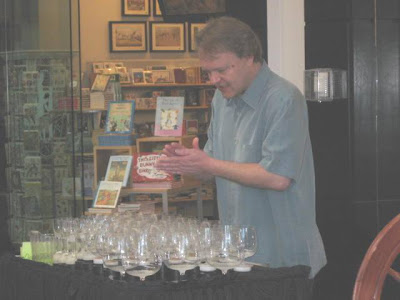 In case you wonder, I'd love nothing more than to show off sounds from one of my best concerts, ever! That Friday evening, shortly before I was scheduled to perform as part of a program at Bruton Parish, we had major chaos. Half of our performers could not be there, and armonicist Carolinn Skyler and I ended up winging it together. We're good at this though. We checked notes later at how sometimes these situations can bring out a lot of calm and ability to improvise. Still, I found myself doing a lot of assembling and hauling and taking charge of everything even as the audience was walking in. I did not get the Zoom recorder on the job. It was a great evening. I will have to see if I can beg something of it later from someone. For that matter, I also don't have any sounds of Carolinn either from this trip. But here she is with me, earlier in the day back at the visitor center: 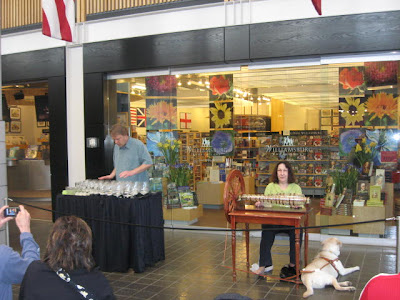 New seeing eye -- Hampton! Hammy's a good boy. He's young, a little squirrely yet, but C is in good paws. Among the many things Carolinn played at the fest, I wish I had gotten her rendition of Flight of the Bumblebee. Carolinn also claims the distinction of having the largest armonica presently on the planet. This is a special instrument Gerhard Finkenbeiner initiated for her shortly before he disappeared. That one is not pictured, rather she is behind one of Dean's... "Stella" the big 'un, is really too dear to fly! 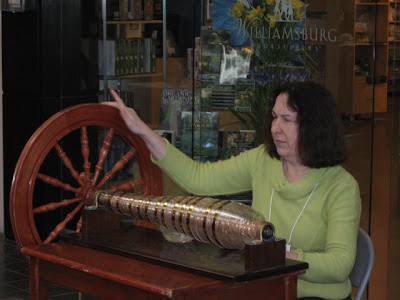 Dean, Kelly, and a third person had put together a wonderful bottle band -- listen! Check out 'Pop goes the Weasel' with a toilet plunger (the popping you are hearing just before is a 'thumb popping' technique with bottles. For three people it was a superb arrangement of clanking, blowing, and popping. I think in the clip is also a bit of the Can Can and 'Ninety Nine Bottles of Beer...' 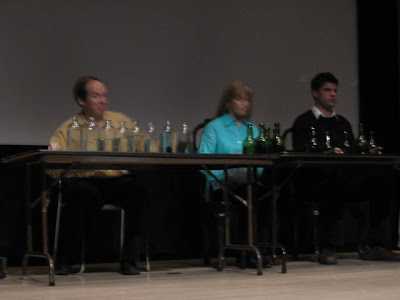 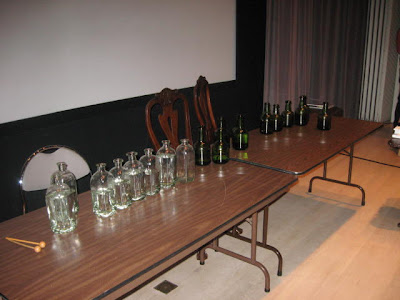 And now for some glass harpists -- beginning with Real Berthiaume, out of Quebec: 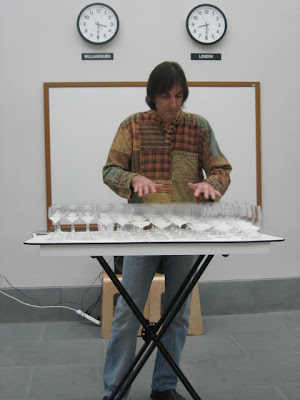 Real is playing a full set of glasses from the Eisch factory in Germany -- I have a number of these for my low range. A full set is splendid! Very full and rich. Real is a super guy and a solid player and composer. Here is a short clip of him, playing one of his compositions with a recorded arrangement.﻿ Real does a lot of street performing, and continues to have a great time at it in Quebec. Close up below: 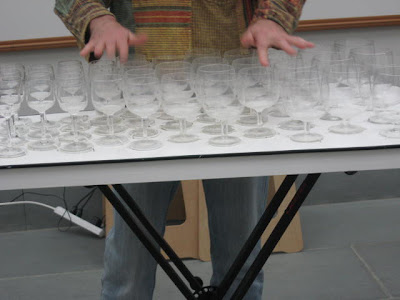 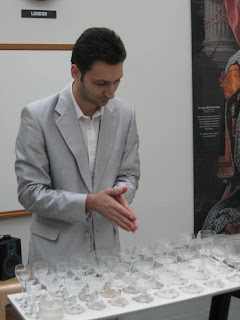 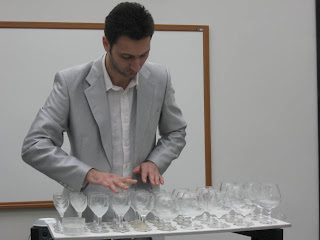 It was a treat to meet Alexander. And it meant a lot to everyone that he had come so far to join us. He plays a set somewhat more 'dog and cat,' similar to mine. I really enjoyed his clarity of playing, very crisp and clean and confident. As Dean's second in charge at times, I was dealing with a tight situation on Friday afternoon, afraid he wasn't getting enough time to play. But then there was a delay for the next thing, so Alexander ended up going on a lot longer and he even went for the full Mozart Adagio and Rondo with a background recording. This is a very involved and long passage of music! Impressive. The rig is too-- not sure if he can fly his glasses in the cabin, but I think this may be the case (well, literally the case is off to the side but it's a bit like a Fender guitar case with glasses secured, cool!)
And now Ladies and Gents, The Douglas Lee. As seen, a few years back, on America's Got Talent. Doug is fun to hang out with and again -- his playing is so clear and confident. I'm really taken by the directness of it and his choices in repertoire. Here is a short clip from his rendition of Mingus' Goodbye Porkpie Hat. Wow. 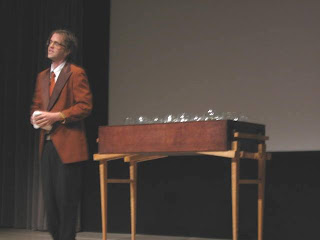 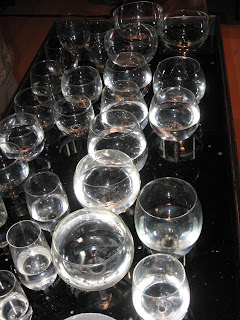 Above is a nice sparkly shot of Doug's set.... below is one more I'd like to share, built by Liselotte Behrendt from Switzerland, or perhaps it's the set of her uncle, Hans Graffe (I hope I'm spelling correctly). Liselotte's Uncle Hans was mentored by Bruno Hoffman, German glass harpist of the mid 20th century. In addition to her warm presence, Liselotte contributed some fascinating stories and photos from many other glass festivals. Photo's a little muddy, it was of a screen projection. 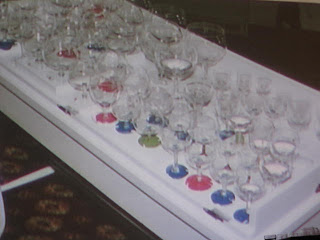